How can radiation be a transverse wave? Does light really resemble a rope? How can a 3D field be a medium for non-spatial 1D waves? Need mental model

When a wave travels through a rope, the rope goes up and down, the position of all the 'rope-particles' changes, they oscillate and this makes up the wave.

With light, it is indeed the electromagnetic field oscillating, but you shouldn't think of the arrows that represent that field in your first picture of light as 'extending into the rest of the space'. They are not spatial, they just represent the magnitude and direction of the electric/magnetic field at that point.

But the medium for a light wave is an electirc field, and the field is 3D, it's spatial.

The medium for the light wave motion is not the electric field . There are two points here:

1) Light is described by Maxwell's equations which are lorenz invariant, i.e. four dimensional, classical waves appear as a solution of the equations and they fit the data

2) The second point is that the Michelson Morley experiment showed that there is no medium on which light propagates, thus the animations you show depict the mathematics of the Maxwell equations which describe light as sinusoidal variations of electric and magnetic fields propagating in vacuum with velocity c.

When going to the underlying quantum mechanical level, light is composed by an enormous number of photons (elementary particles) which in synergy build up the classical electromagnetic wave.In a sense photons are the medium on which the classical wave rides. How this happens is a matter of understanding quantum field theory.

Maybe this picture can give you a feeling. 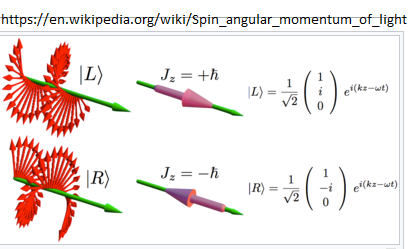 So it is more complicated than your visualizations. 02 : 14
Electromagnetic Waves: Why they are Transverse - A Level Physics
Physics Online
87