Why cannot the Schrödinger equation be solved exactly for systems in which more than two particles interact?

Is it so because it is impossible to solve mathematically?

If the answer could be explained in terms that a new master student in theoretical chemistry would understand, that would be great!

I doubt that is possible. For the case of classical mechanics, Poincaré had a simple argument: one has more degrees of freedom than integrals of motion, and thus, could not solve the equation of motion through the usual integration method. But, as I mentioned, that's not the whole story, and secondly, I'm not sure how to deal with quantum mechanics anyway. So, as Ivan Neretin mentioned in his comment, things are the way they are: for all practical purposes the three-body problems could not be solved analytically.

Why cannot the Schrödinger equation be solved exactly for systems in which more than two particles interact?

And besides, you have to be careful the wording here. I mean, you can easily have a two-particle system for which there is no known analytical solution. This is because the procedure to obtain analytical solution for a two-particle problem relies on the center-of-mass separation trick which works if the potential energy depends only on the relative positions of the particles. More formally, it works only if interactions in the two-particle system are invariant to the translation of the system as a whole. This is the case of two isolated particles that interact just with each other, for instance, an electron and a proton in an isolated hydrogen atom. For this system you can indeed use the center-of-mass separation, reduce the two-body problem to a set of two one-body problems, and get the well-known analytical solutions.

But what if you put that hydrogen atom in a inhomogeneous electric field? Center-of-mass separation won't work than, since potential energy terms due to interaction of both the electron and the proton with the external field depend on their actual position with respect to the field, not just on their relative positions. The same thing happens when considering two electrons in a field of a fixed proton, i.e. just the electronic subsystem of a helium atom. The electronic two-body problem is also unsolvable analytically in that case due to the presence of external (for the two-electron system in question) inhomogeneous electric field created by the proton. 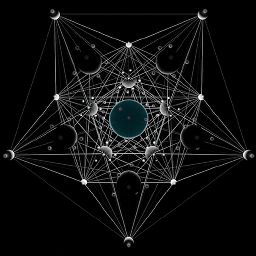