Here is a brief sketch of how one can solve linear systems modulo any fixed integer$~n>0$. If $n$ is prime, usual Gaussian reduction of the system works. If $n$ is a product of distinct relatively prime factors$~n_i$, then by the Chinese remainder theorem the system is equivalent to the collection of systems obtained from it by reducing modulo$~n_i$ for every $i$. Supposing each of these systems can be solved (or proven inconsistent, which I consider a form of solving) one can combine the solutions to get the solution for the original system via the Chinese remainder theorem. In detail: if the system reduced modulo any$~n_i$ is inconsistent, so it the original system; otherwise there are parametrised solutions modulo each$~n_i$, one may need to introduce dummy parameters (occurring with coefficient$~0$ everywhere) in some of them to force the same number of free parameters for each$~n_i$, and then the CRT can be applied to a particular solution and to each of the parameters to lift each of them to a value modulo$~n$, which gives a parametrised solution over $\def\Z{\Bbb Z}\Z/n\Z$.

One can thus reduce to the case where each $n_i$ is a prime power; one still needs to bridge the gap between prime powers $p^k$ and the prime$~p$. For this I suggest using a form of Hensel lifting* to the system. First reduce the system modulo$~p$ and solve that. Then if there are any solutions, lift one of them arbitrarily to a non-solution modulo$~p^2$. Then add an unknown multiple of$~p$ as correction term to it, and express the equation that the sum become a true solution modulo$~p^2$; since any defect of the lifted non-solution is a multiple of$~p$ one can divide a factor$~p$ from the equations obtained, and get a linear system modulo$~p$ that can again be solved using Gaussian elimination. Once lifted to$~p^2$, continue similarly to lift to higher powers of$~p$, until reaching$~p^k$.

There is a complication to this idea for which I do not have an answer right now. Solutions will in general not be unique but parametrised; in principle this means one must apply the lifting separately to a particular solution and to the parametrised part (the solution to the corresponding homogeneous system). However it looks like sometimes the question of whether the particular solution can be lifted at all to a higher power of$~p$ may depend on the choice of that particular solution. If this occurs, it would would mean that during the lifting process one would need to allow for adapting the particular solution to avoid inconsistencies in the set of equations obtained. This would be an additional headache, but maybe it can be shown that this never occurs. One thing that certainly can occur is that a solution exists modulo$~p$ but none exist modulo$~p^2$; this unlike the situation of Hensel's lemma (which only deals with one equation, but which is non-linear). A trivial example of that situation is the system of equations $(x\equiv1,x\equiv3)\pmod4$ which is clearly inconsistent but whose reduction modulo$~2$ is not.

*This is actually due to Schönemann, a relatively unknown 19th century mathematician who also first formulated "Eisenstein's criterion" for irreducibility of polynomials. 07 : 19
Complete Analysis And Proof Of Solutions To A System Of Equations Utilizing Modular Arithmetic
Ken Rubenstein
119 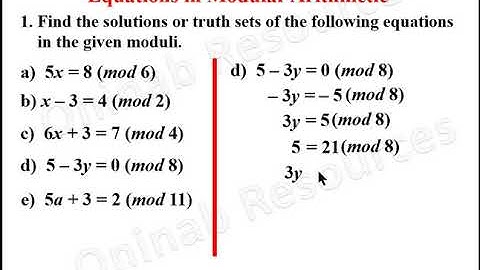